Stephanie Wheeler is a Paralympic gold medalist, World Championship gold medalist, collegiate national champion and a member of two Halls of Fame (North Carolina Sports Hall of Fame and the National Wheelchair Basketball Association HOF).  She was a member of the gold medal winning women’s wheelchair basketball team at both the 2004 Athens and 2008 Beijing Paralympic Games.  She was also a member and co-captain of the gold medal winning 2010 world championship team that competed in Birmingham, England.

Originally from Norlina, North Carolina, Wheeler was recruited to play wheelchair basketball at the University of Illinois at Urbana-Champaign.  During her collegiate career, she was a part of 3 consecutive national championship teams (2002-2004), earning All-American honors each of those years.  She was also named the Most Valuable Player at the national championship tournament in 2003.  During her athletic career, she was selected as a Mentor Athlete for U.S. Paralympics and for The Hartford.

After attending the University of Alabama to receive her master’s degree, she returned back to her alma mater in Champaign, IL in 2009 to serve as the head coach of the women’s wheelchair basketball team.  During her coaching tenure at Illinois, Wheeler was selected as the head coach for the USA Women’s Under 25 national team that won the inaugural Women’s Under 25 World Championship in 2011 which earned her the 2011 NWBA Developmental Coach of the Year.  In 2013, she was named the head coach for the USA Women’s Senior National Team.  During her tenure as head coach, she led the team to a gold medal at the 2015 ParaPan American Games and a gold medal at the 2016 Rio Paralympic Games.  As a result of her competitive and coaching success, Wheeler was elected to the North Carolina Sports Hall of Fame in 2017 and the NWBA Hall of Fame in 2018.

While coaching is important to Stephanie, education and social change drive her as well.  She is currently completing her doctoral degree in Cultural Kinesiology at Illinois, studying sport at the intersection of disability, gender, and sexuality. Her goal through her education, activist work, and coaching career at Illinois, is to make sport an accessible and safe space of belonging for all who participate regardless of gender, ability, or sexuality, and to be empowered by that participation in sport. That passion has led to an active membership with WeCoach, working closely with the NCAA national office to advance the sport opportunities for students with disabilities at the collegiate level, speaking engagements on campus and across the country, a membership with the Nike LGBT Sport Foundation, whose mission is to end homophobia in sports, and acting as a coach ambassador for Athlete Ally. 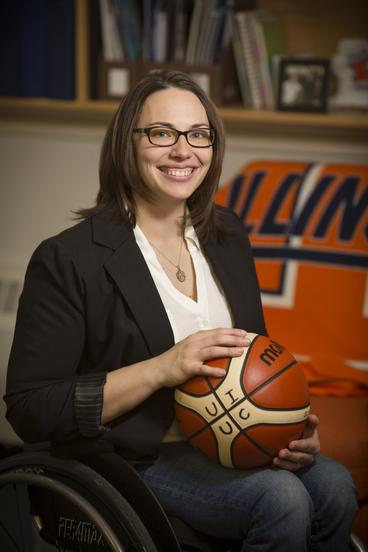